Innovation shared with youth at fair 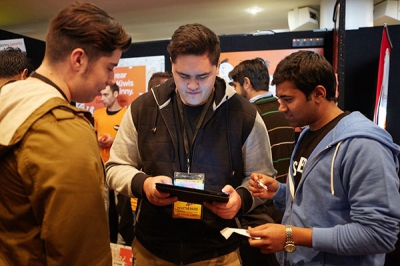 Young jobseekers began queuing an hour before the doors opened on Wednesday morning at The Cloud on Auckland’s waterfront. Some were wearing borrowed suits and dress clothing, such was their enthusiasm and determination to make a good impression on the 75 employers exhibiting at JobFest 16.

Over the four-hour event, more then 2000 young people were given the opportunity to talk with employers and get hands-on help with CV building, job applications and interview skills. And if the success of last year’s two JobFest events is anything to go by, several hundred young people will have secured a job from their day out.

JobFest is a partnership formed between business, government agencies and philanthropic funders, and is one of the activities employers commit to when they sign up to The Youth Employer Pledge.

The Pledge is delivered by Auckland Tourism, Events & Economic Development (Ateed) as part of the Auckland Council Youth Connections programme, and is generously support by the Tindall Foundation. Implemented in 2015, the initiative was designed to help Auckland’s 23,000 young jobseekers into employment at a time of critical skills shortages in a number of sectors.

Fletcher Building was the first business to become a pledge partner a year ago, and has since been followed by 53 other employers including, The Warehouse, McDonalds, NZ Post, Xero, NZME and Rainbow’s End.

Patrick McVeigh, General Manager of Business Innovation and Skills at Ateed, says the purpose of the pledge is to provide expert insights and research to partner businesses in order to support and build their capacity to employ young people. In turn, those businesses pledge to create employment opportunities for young people.

“Pledge partners commit to a range of targets and activities,” he says, “including entry level employment for 16-24 year olds as well as internships and work experience opportunities. They provide mentoring, pastoral care apprenticeships and they commit to enhancing workforce diversity.”

The pledge works to bridge the gap between employers and young people, which has significant benefits to both groups, says McVeigh.

“Over half of Auckland’s businesses are planning expansion as a result of strong growth in construction and infrastructure, tourism and ICT. So, very clearly, we need more young Aucklanders in employment and training to develop the skills these growing businesses need. Employing young people addresses skills shortages and reduces the impact of an ageing workforce. It also brings fresh perspectives and digital savvy into Auckland workplaces.”

The pledge benefits youth not only by immediately generating more roles specifically for young people, but by showing the business community how the new generation workforce differs from previous generations and how best to engage with them, both on a recruitment pathway and for long-term employment.

Pledge Partners are willing to share their experience with the wider business community and each other. Leanne Laloli, Team Development Manager at Rainbow’s End, says committing to the pledge was a great opportunity to connect with likeminded businesses. Rainbow’s End won last year’s Auckland Youth Employer of the Year award and Laloli says, “I think we’re quite innovative here – we’re always looking for new ways to engage our staff. So joining the pledge was a way to catch up with other businesses, find out how they do things and share what’s great.”

Laloli found last year’s JobFest beneficial because of the opportunity to talk to applicants. Of the hundreds of young people who came to her stand and filled in application forms she was able to set aside the ones she thought would be really good, which led to jobs for seven or eight young people who applied on the day.

Joanne Scanlan, 22, attended JobFest 16 on Wednesday to talk to employers, see what jobs were available, and hopefully secure a job in pick and packing. She was keeping an open mind, though, about other jobs that might suit her and would be checking jobs listed with everyone. Scanlan came prepared with multiple copies of her polished CV which detailed her education, skills and work experience. Although she was particularly keen to speak to Pride & Joy Ice Cream and Griffins, she intended to give her CV to every employer, “because I’m always open to options and advice”. She thought it was great to have an event where young people can meet employers, because it gives them a chance. “I think youth struggle to find work,” she said. “It’s hard getting a job- it’s difficult, complicated and frustrating. I am hoping the JobFest will open up some positive options.”

JobFest and the Youth Employer Pledge were developed by Auckland Council’s Youth Connection initiative, formed in 2012 and championed by 10 Local Boards, Ateed and Auckland Council’s Empowering Communities division. Youth Connections takes a strategic brokerage role – connecting young people and employers at local and regional level, and has supported initiatives like driver licensing programmes and work readiness courses. It has helped more then 5000 young people to become work ready, and has unlocked more then 2000 job vacancies, filling nearly half of them.

Auckland Mayor Len Brown says JobFest was created to bring young people and employers face to face and it has been hugely successful. “Employers are getting more and more of Auckland’s young talent into work and career pathways,” he says. “That is the key objective but it also means that while young people are being employed, we are easing the critical skill shortage in a number of sectors.”

With more employers coming on board and committing to the pledge, Mayor Brown says the momentum is continuing to build. “We have an impressive list of Auckland’s biggest and best companies committed to a range of targets and activities and our young people are undoubtedly benefiting.”