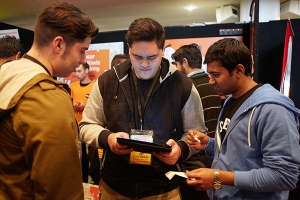 Businesses taking part in this latest JobFest were from a range of sectors, and had more than 500 vacancies they were looking to fill.

Businesses like Fletcher Building were looking for young people who could bring education, energy, keenness to learn and new ideas to their businesses.

“The event at the stadium was remarkable,” said Mr Brown.  “It’s just so encouraging to see hundreds of willing young people who were ready to work hook up with employers who have a commitment to providing job opportunities to young people.

“This is another important step towards to solving Auckland’s youth employment issue.”

It brings together business, central government, young people and other key stakeholders to develop solutions and pathways to employing young people.

Auckland Council is committed to reducing the number of NEETs through initiatives like JobFest and with the help of its youth employment partners which include the Tindall Foundation and several high profile companies who have signed up to its Youth Employment Pledge.

Auckland Council will now analyse the results of JobFest15 in terms of how many young people were employed or were helped into future employment.

Analysis from the Manukau JobFest15 in February this year shows about 500 young unemployed people who attended got jobs or the chance of employment.

“Given there were both more young people and employers at this latest summit, we are confident this JobFest15 will be even more successful,” says Mr Brown.

The next JobFest event is scheduled to take place in early 2016. For more information on youth employment initiatives in Auckland visit http://www.aucklandnz.com/business/youth-employment.