Because of a conversation had between Kawerau Mayor Malcolm Campbell and Matamata-Piako Mayor Jan Barnes, an innovative employment initiative was created. 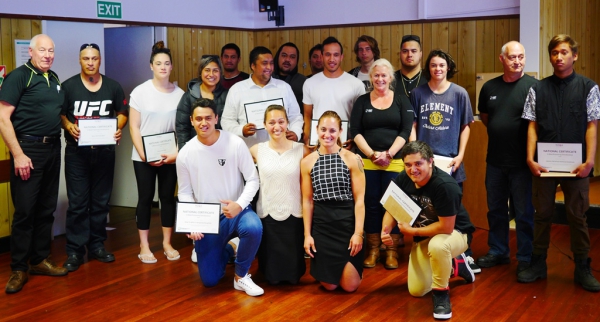 Pictured far left is Mayor Malcolm Campbell standing beside Steve Dean, as well as the other graduates from the initiative.

Until this year, Steve Dean had only ever been able to work during shuts at the Kawerau mill.

To keep their family afloat, his partner Dallas Matoe worked four jobs. But that all changed when Kawerau district Councillor Faylene Tunui called to say she needed to talk to them about something.

Ms Tunui visited them later to explain an initaitive she was exploring with meat company Silver Fern Farms and Mr Dean told her to count him in.

It was a decision that would change their lives forever.

The initiative involves sending people from Kawerau to live in the Waikato and work at Silver Fern Farms meat processing plants in the region, including at Te Aroha and Waitoa.

It was an idea that sprung from a conversation between local Kawerau Mayor Malcolm Campbell and Matamata-Piako Mayor Jan Barnes. The two had been in Wellington at a meeting for the Mayors Taskforce for Jobs and were chatting over a coffee when Mrs Barnes mentioned Silver Fern Farms was finding it difficult to employ enough people in Waikato.

With jobs a scarcity in Kawerau, Mayor Campbell, a butcher by trade, told his counterpart they might be able to help each other.

He put Mrs Tunui onto the job and she set up meeting with Silver Fern Farms management, including Dean McNaught.

It took several months of planning but the first tranche of workers, the 'Tight Nine', as the would become known, arrived in the Waikato in May.

Mr McNaught said the calibre of Tight Nine workers was impressive so the initiative was extended to include more Kawerau people.

The group were joined by 24 others from Kawerau for the bobby calf season. The new group would become known as the Twilight Team because most would work night-shift.

After completing the national certificate in meat processing level 1, the 33 workers from Kawerau were recognised at a ceremony at the Kawerau Concert Chambers to celebrate their success.

The group were back in Kawerau for a month-long holiday before returning to the Waikato in November to resume full time work for the beef season.

Mr McNaught said when Mrs Tunui approached him about the initiative he had been looking for more workers and was thinking about heading to South Auckland to attract more employees.

He said wile it was't all plain sailing, he was glad that he had chosen the groups from Kawerau because they have made him feel truly proud.

"Obviously, along the way there were some hiccups, but they handled it and learnt the value of making good decisions".

Mrs Tunui said she was proud of the group because they had acted like good ambassadors to the community.

"When someone is working it impacts on that whole family. And this is just a bit of help to get some people a foot in the door."

"Sometimes we need a little bit of help"

"I thought maybe we could get our kids into work and that they could find mana and self-worth through it".

Since starting with Silver Fern Farms in May, Mr Dean has secured year-round full-time employment at the Waitoa plant. His family has moved from Kawerau to the Waikato town of Waihou. Also this week his partner, Ms Matoe will also start work for Silver Fern Farms.

He said he would never forget Kawerau but he was stoked he was able to financially support his family and he loved living in Waihou.

"Its nice to come home for a visit but it is always great to go back to Waihou and know that i have work tomorrow.