Mayors And Government Partner To Get More Young People Into Jobs 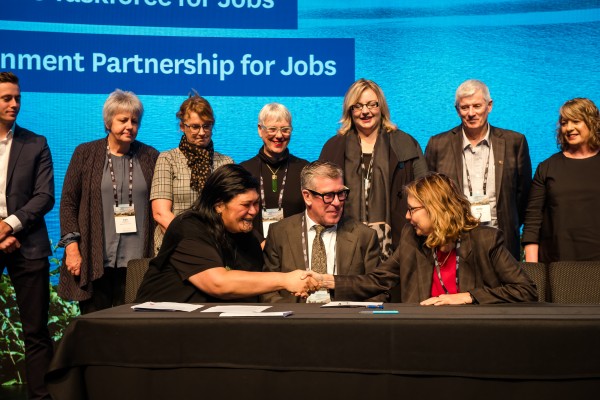 The Mayors Taskforce for Jobs and the Government have today signed a formal agreement to work in partnership together to get more young people into local jobs.

Mayors Taskforce for Jobs Chair, Mayor Max Baxter of Ōtorohanga District Council said: “the signing of this Memorandum of Understanding (MoU) today recognises the role that local government and in particular, the unique role that Mayors can play in providing opportunities for young people to engage in the workforce.”

“We know that local needs are often best met by locally-led solutions and the MTFJ is a great example of this work delivering outstanding results for almost two decades. By working together to align and connect our collective resources, we have provided real opportunities through pathways to employment for our rangatahi,” said Minister Mahuta.

The MOU has four key areas of interest, which the Mayors Taskforce for Jobs (MTFJ) see as key opportunities and challenges for young people when entering the workforce. These four key areas are driver licencing, education, health and the importance of rangatahi mentoring.

The MOU was signed at the 2021 Local Government New Zealand (LGNZ) Conference in Blenheim by Mayor Baxter, Minister Mahuta and the Chief Executive of LGNZ Susan Freeman-Greene.

“As a nationwide network of all 67 of New Zealand’s Mayors centred around youth employment, MTFJ is a credible organisation with deep ties to local communities and can bring forward community led solutions to the Government in regards to how we can work in partnership to make dents in our countries high youth unemployment figures,” said Mayor Baxter.

Although the New Zealand economy has responded well to the economic crises of COVID-19 with the unemployment rate falling to 4.7 per cent for the March 2021 quarter, signs for young people under the age of 24 have not been as promising. For the March 2021 quarter, the seasonally adjusted proportion of people aged 15–24 years who were not in employment, education, or training (NEET) rose to 13.1 percent, up from 12.4 percent last quarter.

Equitable access to driver licencing and testing for young people remains a significant barrier for young people when progressing into the workforce, especially for those living in rural New Zealand where there aren’t local testing stations. It is estimated that 70 per cent of entry level jobs require a driver licence and between 70,000 – 90,000 young people currently face barriers to accessing the system, according to a report from the Auckland Co-Design Skills Lab.

MTFJ believes that a national programme should be put in place to see driver testing and education established in secondary schools for students.