The Mayors Taskforce for Jobs launched the Steering Aotearoa initiative in Waipukurau on Monday 2 May which aims to provide all students’ with the opportunity to gain their learners, restricted and full licences while at secondary school 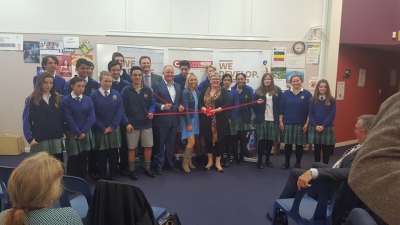 The Mayors Taskforce for Jobs (MTFJ), in partnership with Massey University and Connecting for Youth Employment – Central Hawke’s Bay (CYE), launched the Steering Aotearoa initiative in Waipukurau on Monday 2 May.  The launch also marked the beginning of the pilot programme which will provide an evidence base and support the vision that “all students’ gain their learners, restricted and full licences while at secondary school”.

Steering Aotearoa was initiated after the MTFJ identified that one of the biggest barriers to employment for young people was a lack of a driver’s licence. This issue is common, especially in the more rural communities throughout New Zealand, and as a result the MTFJ have identified this programme as its priority over the next 12 months.

MTFJ co-Deputy Chair’s, Manawatu Mayor Margaret Kouvelis, and Otorohanga Mayor Max Baxter both spoke on behalf of the MTFJ at the launch. Mayor Kouvelis said “the aim of this initiative is not only important for our local communities; it is vital for the New Zealand economy. There are hundreds of young people missing out on employment opportunities due to a lack of a driver’s licence, and the MTFJ is pushing in a direction to ensure that is not the case”. She mentioned that for this to be a success, it was important that a pilot programme was run in a community where the critical components to the programme could be tested, as well as identifying how it could be ‘scaled’ into other communities.

The pilot programme is being run within Central Hawke’s Bay College in Waipukurau and would initially include 20 students all 16 years of age. The pilot would progress each student through the learners and restricted stage of the NZ graduated drivers licence system throughout the 2016 calendar year. The pilot would not only give students the opportunity to gain a licence; it was also providing them with professional driver training, driving mentors and supports, and education about safety on the roads. An expansion to include the same 20 students in their full licence stage, as well as more students from the community is currently being worked on.

The pilot programme is being run by CYE Director Kelly Annand, who has been the instigator for this project. Kelly mentioned that for too many years she had worked with young people in the community that don’t have driver’s licences. “The amount of opportunity that I see lost because of this issue is astounding. I have always been a big advocate for my community, but something has to be done at a national level.” Kelly was pleased that there was an interim solution being worked on for the local community, but stressed the importance of achieving the Steering Aotearoa aim.

Following the 2016 pilot programme in Waipukurau, the MTFJ will work with Massey University on developing the research findings and a business case which will support the overall aim of the initiative. These findings will then be presented to government ministers.

Minister Craig Foss, who is the local MP for Tukituki and Associate Minister for Transport, spoke about the awareness within central government of this issue, and how “provincial communities in New Zealand were struggling because of it”. The Minister commended the local community in the Central Hawke’s Bay for taking up this challenge, and noted that “the government was watching this programme with much interest”.

Also in attendance was the local Mayor Peter Butler, MP for Wairarapa, Alistair Scott, LGNZ Chief Executive Malcolm Alexander, as well as a number of local representatives including Central Hawke’s Bay College, the Police and the Hawke’s Bay Regional Council.

“It was important that the MTFJ was involved in this, as all 67 mayors in the country are united in the same view that all young people should have the opportunity of gaining a drivers license” says Mayor Kouvelis.

There had also been a lot of interest from the private sector in this initiative which would be negotiated throughout 2016 and incorporated into the final case presented to the government.

To hear Dan Henderson in an interview about Steering Aotearoa with Radio Southland, please click here